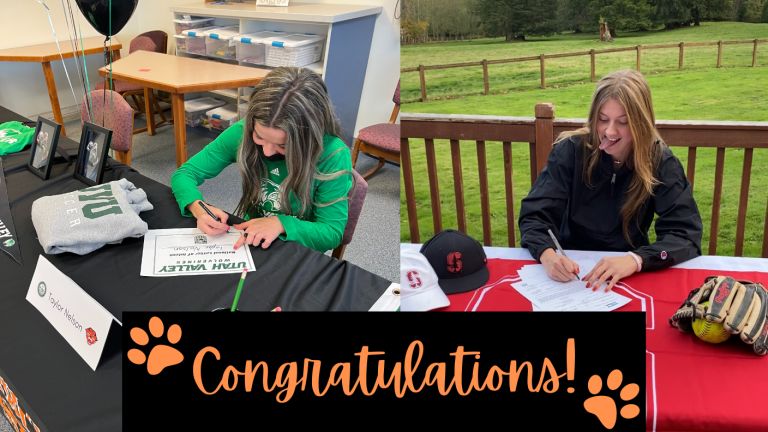 On Wednesday, November 10th, Monroe High School had its first of four National Letter of Intent signing days. This first signing period was for student-athletes signing a letter of intent to play either Division 1 and Division 2 sports such as soccer, volleyball, softball, gymnastics, track and field, tennis, golf, and many others. Two Bearcats signed letters of intent to continue their athletic careers at the next level.

The first signee was River Mahler. River is a two sport athlete earning varsity letters in both volleyball and softball. In 2021, she was named the Best Player in Washington State for softball by Max Preps and earned 1st team All-Wesco honors both her freshman and junior season. River is one of the best offensive players at Monroe High School who can play small ball as well as hit for power. In just two seasons she has an impressive batting average of 0.610, which puts her on pace for breaking the school record. River will be continuing her softball career at Stanford University.

The second signee was Taylor Nelson. Taylor has lettered all four years in soccer. She earned 2nd team All Wesco honors this season and Wesco Honorable Mention her junior year. In 2018, she was Monroe's offensive player of the year and has earned player of the week honors by the Everett Herald multiple times. Taylor has been a prolific scorer for the girls soccer team amassing 48 career goals, which is 2 shy from the school's record for goals in a player's career. Taylor will be continuing her soccer career at Utah Valley University.

We are excited to follow each of the student athletes on their journey after MHS, best of luck!