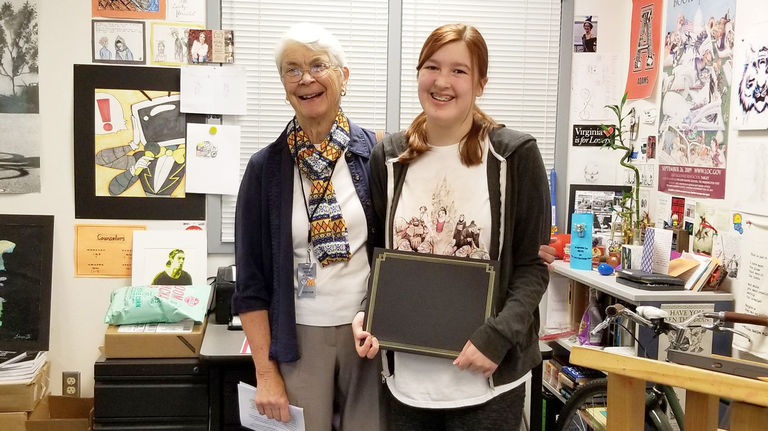 Monroe High School freshman, Laci Thoma, has been recognized by the Snohomish County Children's Commission (SCCC) as a 'We Value Kids Award Winner' for 2019.

Laci was nominated by the REACCH team at Park Place Middle School (Dottie Simoni, Tonia Boyle and Jodi Stalter) for the 'We Value Courage in Kids Award.' This award acknowledges students who "regularly 'do the right thing,' who are brave in standing up for their beliefs and for one another and who even take a lonely stand on an issue or in an uncomfortable situation."

REACCH is a new program for Park Place students who have the ability to perform at higher academic levels with added support. The program "strives to create a learning community in which students have the ability to advocate for themselves and support one another." According to the REACCH team, Laci was hesitant at first as she faced the rigorous curriculum and challenging expectations of this program but she "decided to take a leap of faith and enroll. Laci blossomed and made amazing growth in her academics and confidence." They saw her go from a rather quiet student to one who really assumed a leadership role, not only advocating for herself but helping other students. Her sense of courage was matched by her compassion. They felt her steady, unassuming manner "changed our learning community and had a significant impact on her peers."

The members of the Awards Committee of the SCCC were so impressed by the recommendation for Laci, especially because she chose a more challenging path and she persevered while her courage and compassion helped other students who did not possess the ability to stand up for themselves.

Karen O'Meara Pullen, member of the Snohomish County Children's Commission, surprised Laci in class today at MHS by presenting her with a certificate in front of classmates. "It was an honor and an inspiration to hear Laci's story and to present her this award," said Pullen.

Receiving nominations for these awards from 15 school districts throughout Snohomish County, the Commission shared that "it is heartwarming to know there are so many young people in our community taking a stand and making a difference in the lives of others." Please join us in congratulating Laci for her courage.