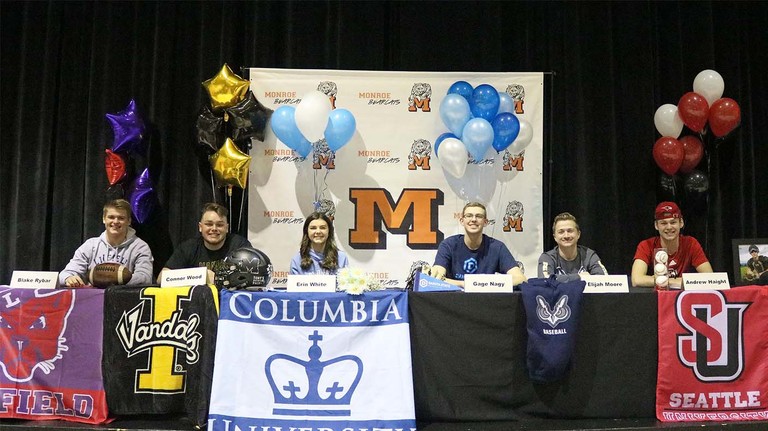 At the third of four National Letter of Intent signing days at MHS this school year, the crowd witnessed six of Monroe High School's student-athletes sign their National letters of intent to continue their athletic careers after high school.

Up first was Andrew Haight. Andrew has lettered twice in baseball while at MHS and was honored by being named to the 2019 All-Wesco 1st team as catcher. Andrew not only excels on the baseball field, he works hard in the classroom too, carrying a 3.2 GPA. This fall, Andrew will be playing baseball for Seattle University and working on an undergraduate degree in Business.

Next up is Elijah Moore who also plays baseball at MHS. While at Monroe High School, Elijah has filled his time with honors and AP classes in math, history and English and has a 3.986 GPA. What an accomplishment! Elijah will be studying Software Engineering Technology at the Oregon Institute of Technology this fall while playing baseball.

Our third and final MHS baseball player that signed a letter of intent was Gage Nagy. Gage will be heading to Dakota State University in Madison, South Dakota to play baseball and study math and statistics. He will graduate in June with a 3.74 GPA and has participated in football and baseball the past three years and will start his 4th year of baseball next month. Gage is a part of National Honor Society and can be regularly found leading the trombone section of the Bearcat Band.

Next up is Erin White. She is thrilled to be joining Coach Derek Davis and the Columbia University Lions's archery team in New York City. Erin is a 4-year member of National Honor Society, has been on the US Archery Junior Dream team the past three years, the US National Field Archery team and is a US National Field Archery Champion. While at Columbia, Erin will study Biology. During her time at MHS, she has taken Honors and AP History, Math and English courses, is active in leadership, and has a 3.987 GPA.

Connor Wood is a 3-year varsity letter winner in football and headed to the University of Idaho this fall. Connor was named to the 2019 All Wesco team as Honorable mention, 2020 2nd team All Wesco, was a 2020 Bearcat Team captain and was named to Seattle Times Chip List of the Top 100 football prospects from the class of 2020. Connor spent his junior year at Running Start through Everett Community College and chose to return to MHS this fall full time for his senior year. Connor is carrying a 3.45 GPA and is planning to study Sports Medicine while a Vandal.

Finally, rounding out the signees today, is senior Blake Rybar. While at MHS, Blake has earned 11 varsity letters including 2 years of track, 3 years of lacrosse, 3 years of basketball and 3 years of football. Blake was named to the 2018 All Wesco Lacrosse second team as a midfielder, was chosen as a KRKO football player of the game in 2018, was chosen as WIAA player of the week for football in 2018, and earned 2018 All Wesco first team offense and defense recognition for football. This past fall, he also was named to All Wesco first team offense and defense for football, as well as All area second team offense and defense for football. Blake is not only stellar on the field, he shines in the classroom and in his personal character as well. Blake has taken honors and AP level math courses and has a 3.42 GPA. He is currently serving as the Student Relations Commissioner where his primary role is working with the student body to provide what they need, meeting people where they're at and being kind to others, all of which comes naturally for Blake. Blake will be heading to Linfield College in McMinnville, Oregon to play football and study business this fall.

After the six student-athletes signed their letters of intent, the audience filled with parents, coaches, students, and fans erupted in applause. We are excited to follow each of the student athletes on their journey after MHS.