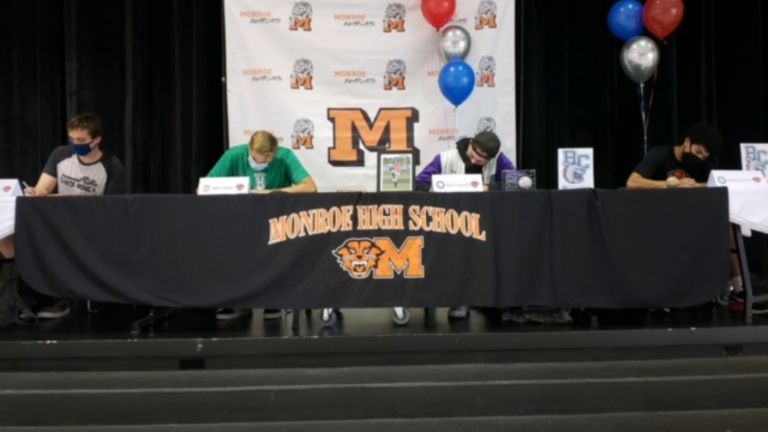 Jude Pazier will be continuing his swimming career at Whittier College in Pasadena, California. While at Monroe High School, Jude has lettered 4 times for swimming. He has earned Most Valuable Player and the Hardest Worker Award on his team. Jude is not only a tremendous athlete in the pool but also a tremendous student in the classroom. He is one of two salutatorians this year earning a 3.99 GPA. Jude plans to continue his excellence in the classroom at Whittier by pursuing a degree in Aerospace Engineering.

Sam Olson will continue his basketball career at Highline College. While at Monroe High School, Sam lettered four times in basketball, was named All Wesco honorable mention his sophomore year and All Wesco 2nd team his junior year. As a senior, Sam was named a team co-captain and is still leaving his mark on the program as they wrap up their season next week. At Highline College, Sam plans on studying construction management and business.

Ryan Lynch will be continuing his baseball career at Bellevue College. While at Monroe High School, Ryan lettered Four times in baseball and two times in basketball. As a freshman he was named Pitcher of the Year and he lead his team to the quarter final round of state his sophomore year. He was also named to the All Wesco 2nd team that year. As a senior he was named captain and helped lead the program to a 12-1 season. Ryan has also received recognition for his artwork, earning honorable mention in 2020 for an art project that was showcased at an art exhibition in Everett. At Bellevue, Ryan plans to pursue a degree in the medical field.

Nathan Cain will be continuing his baseball career at Bellevue College as well. While at Monroe High School, Nathan has lettered three times in baseball, tennis and basketball. He is our only student athlete this year who has lettered three times in three sports. This is an amazing accomplishment that speaks volumes to his dedication and commitment to the athletic programs at MHS. This year Nathan was named to the All Wesco 1st Team and Everett Heralds All Area 1st team. He was also invited to play in the All State All Star game. At Bellevue, Nathan plans to pursue a degree in environmental science and biology.

Two student athletes were unable to attend the ceremony - Krista Norton and Luke Zmolik. Next year Krista will be playing volleyball at Roosevelt University and Luke will be continuing his baseball career at Butler University.

We are so very proud of all of you, thank you for leaving your mark as an MHS student-athlete. We are excited to follow each of you on your collegiate journey and wish you the best of luck.